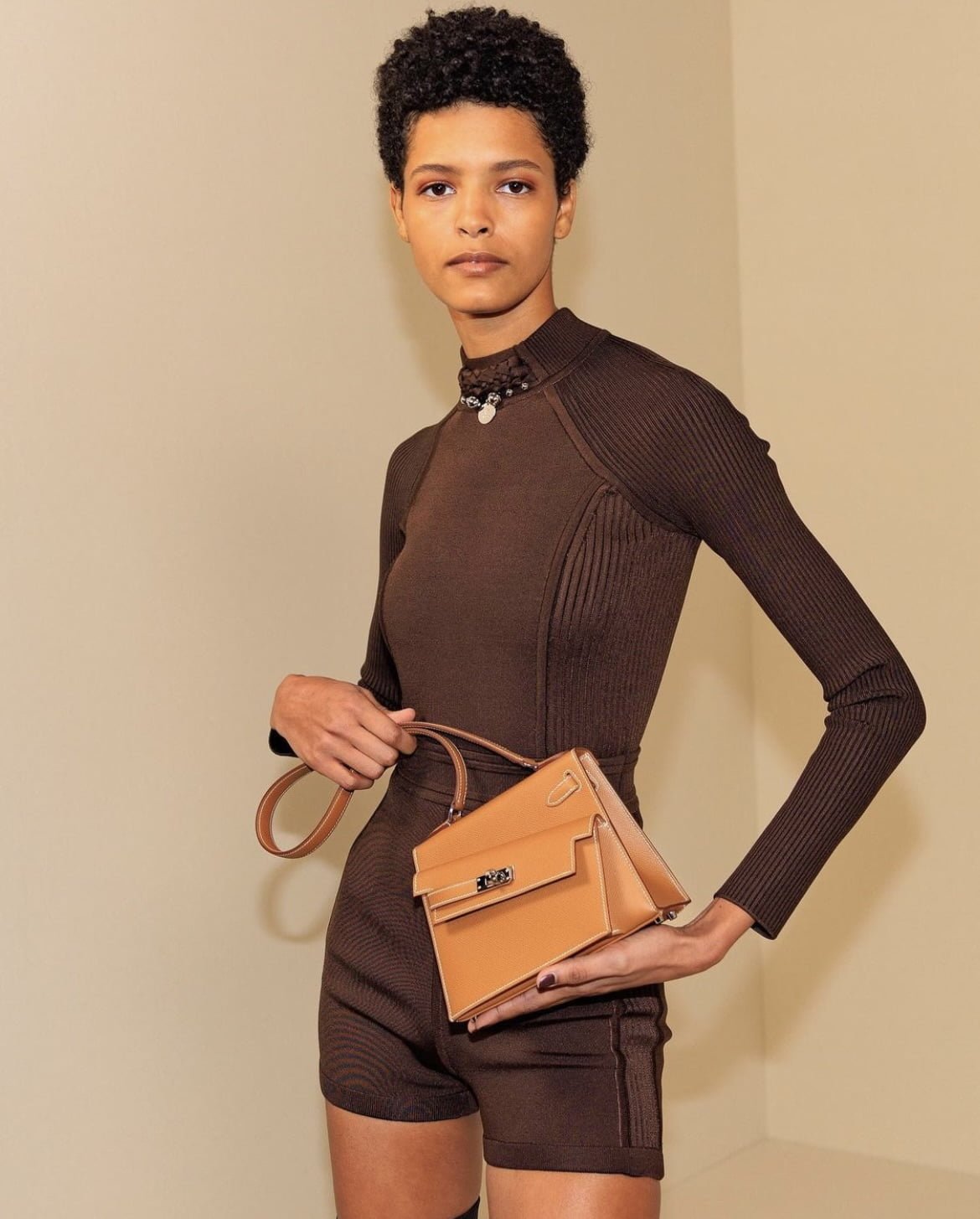 Our favorite bag in the show resembles a Kelly Sellier but with a twist. Structured like the Sellier Kelly, but has exterior openings on both sides.

We have been informed by @speciale._ that the name of this new bag is Kelly Sellier 20 en Desordre, which is part of the disorder series.

The front exterior includes a plain flap attached at an angle secured by one sangle and a touret. This flap allows access to the main body of the bag. The other side (which is even more interesting) sports an outer pocket (resembling a Kelly pochette) similarly secured by a flap, one sangle and a touret. From some angles on the runway, this bag could be described as a two-in-one Kelly bag.

Additionally, the bag sports a non-detachable shoulder strap. Like the Kelly Sellier, there are four clou on the bottom. The bag appears to be approximately 25cm across the bottom but is not as tall as the Kelly 25 and does not have a top handle.

On the runway, it appeared in gold epsom leather and white contrast stitching and in black box or swift leather. We predict this bag will be a fan favorite. Once we learn the name of this one we will keep you posted. 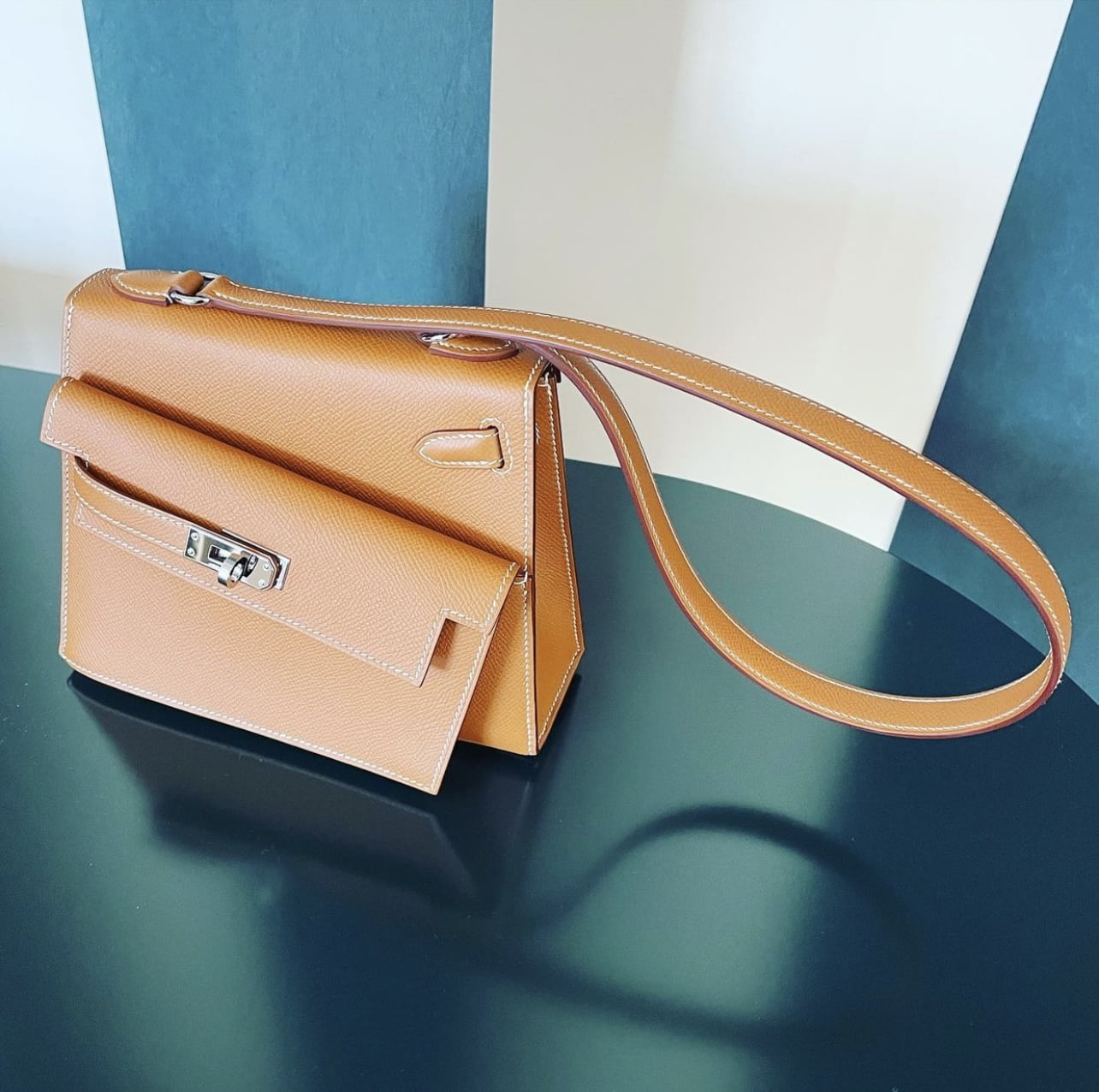 New bag number two resembles the Kelly Danse albeit with a non-detachable shoulder strap. Worn crossbody and tight across the chest on the runway, resemblance to the Kelly Danse includes its size and structure. Shown in black and etoupe smooth leather, we imagine this one in seasonal colors as well. The next Kelly-like bag is a rectangular shaped Kelly wallet looking bag much like the Kelly To Go. However, the main difference is a thicker shoulder strap with palladium equestrian details. It appears to be the same size as the Kelly To Go. 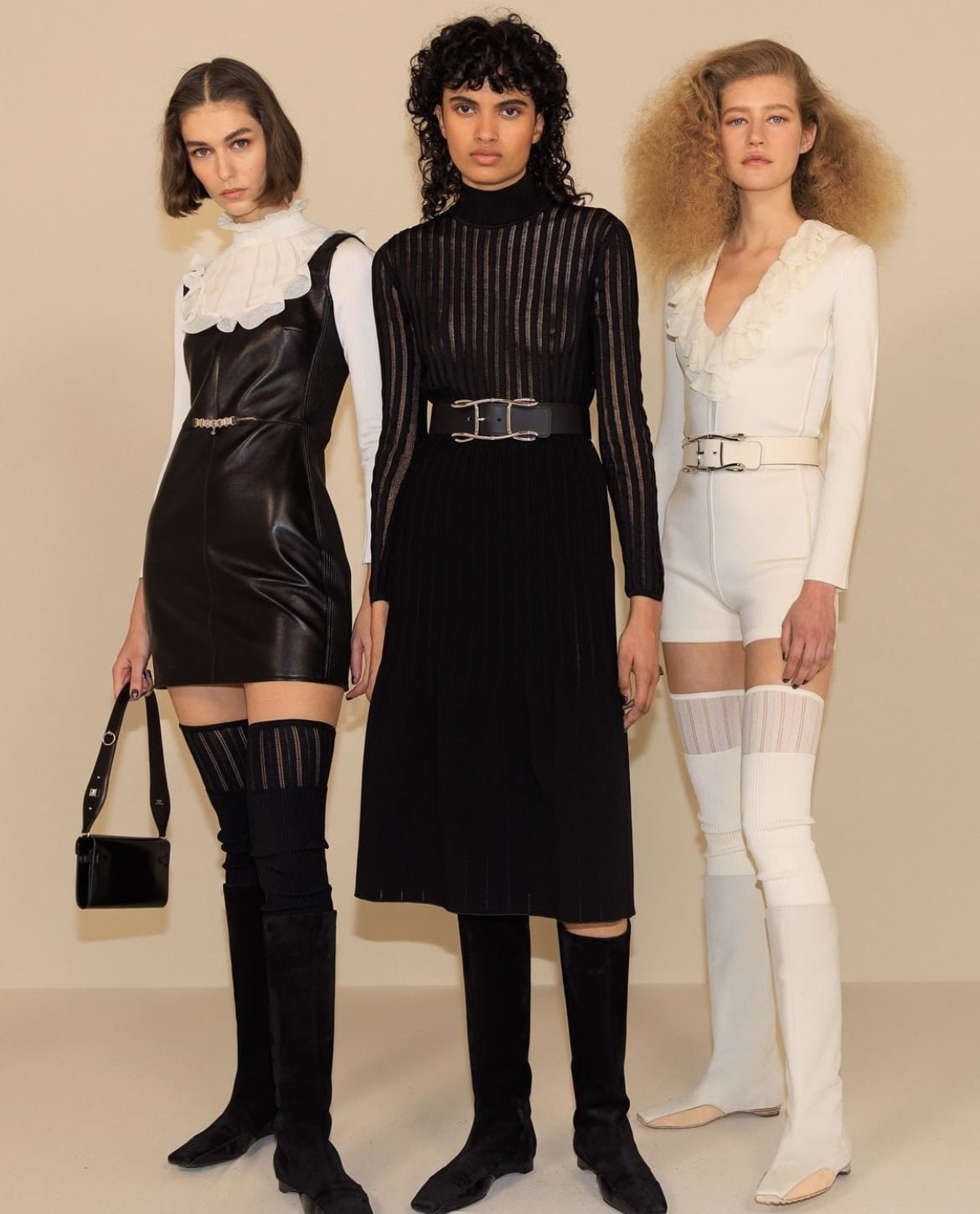 But we’re not done yet with Kelly-inspired models. This bag is a new rectangular design shoulder bag with a prominent zipper extending from end to end. There is a cut out detail on one end of the bag that looks interesting but was difficult to see. A large leather zipper pull hangs from a ring. It was shown in smooth leather in white, black and brown. The bag could be the size of a Kelly pochette or slightly bigger. Fans of big size bags, don’t despair. We viewed a larger bag resembling the Kelly 32 or 35. It had a larger and longer top handle that could be worn on the shoulder. A long zipper extends horizontally across the bag and wraps around one side. Included on this one is what appears to be a clochette hanging down the side of the bag from the top handle. The bag has 4 clou on the bottom. The final new bag style is a north-south mini rectangular shaped bag with a handle. It has an interesting modern H detail and a zipper which extends the length of the bag. We estimate it is about the size of a long wallet. Adding to the repertoire of diverse Kellys, we spotted a new Birkin variation. The name of this bag is expected to be Birkin 30 en Desordre, again part of the disorder series like the Kelly above. We are told there is also a Bolide 25 en Desordre as well. Thanks to @speciale._ for the information.

With a half flap set on the diagonal and an exterior pocket, the Birkin got a makeover. Displayed in gold togo leather on the body and swift leather on the flap and pocket. Although we did not see this Birkin walk the runway, it is likely to be a limited edition variation on the classic Birkin we all love.

Aptly stated by @thebaghag “these [are] Picasso-esque iterations of the maison’s classics.” Hermes will continue to surprise us each season and we look forward to each one. 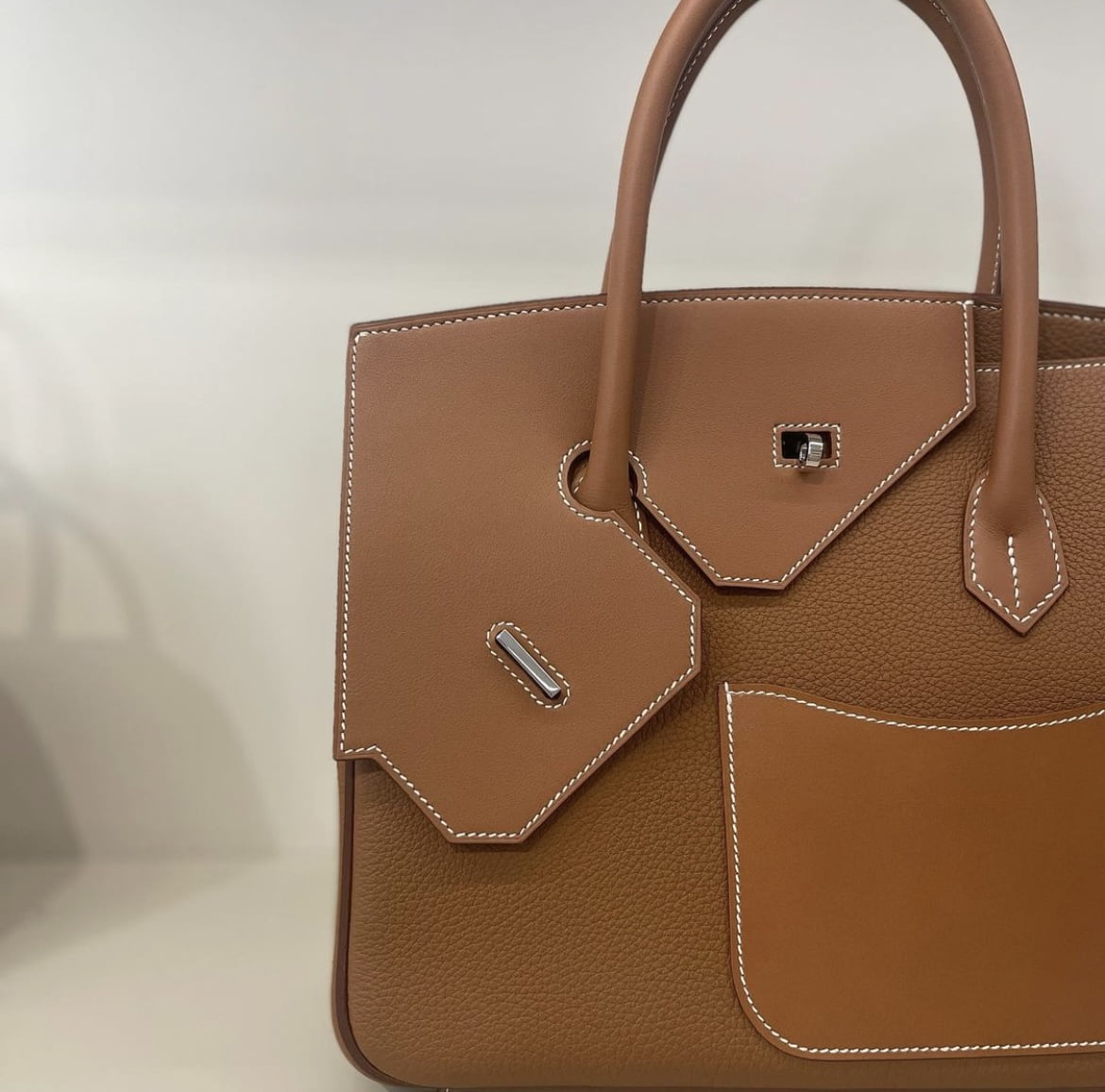 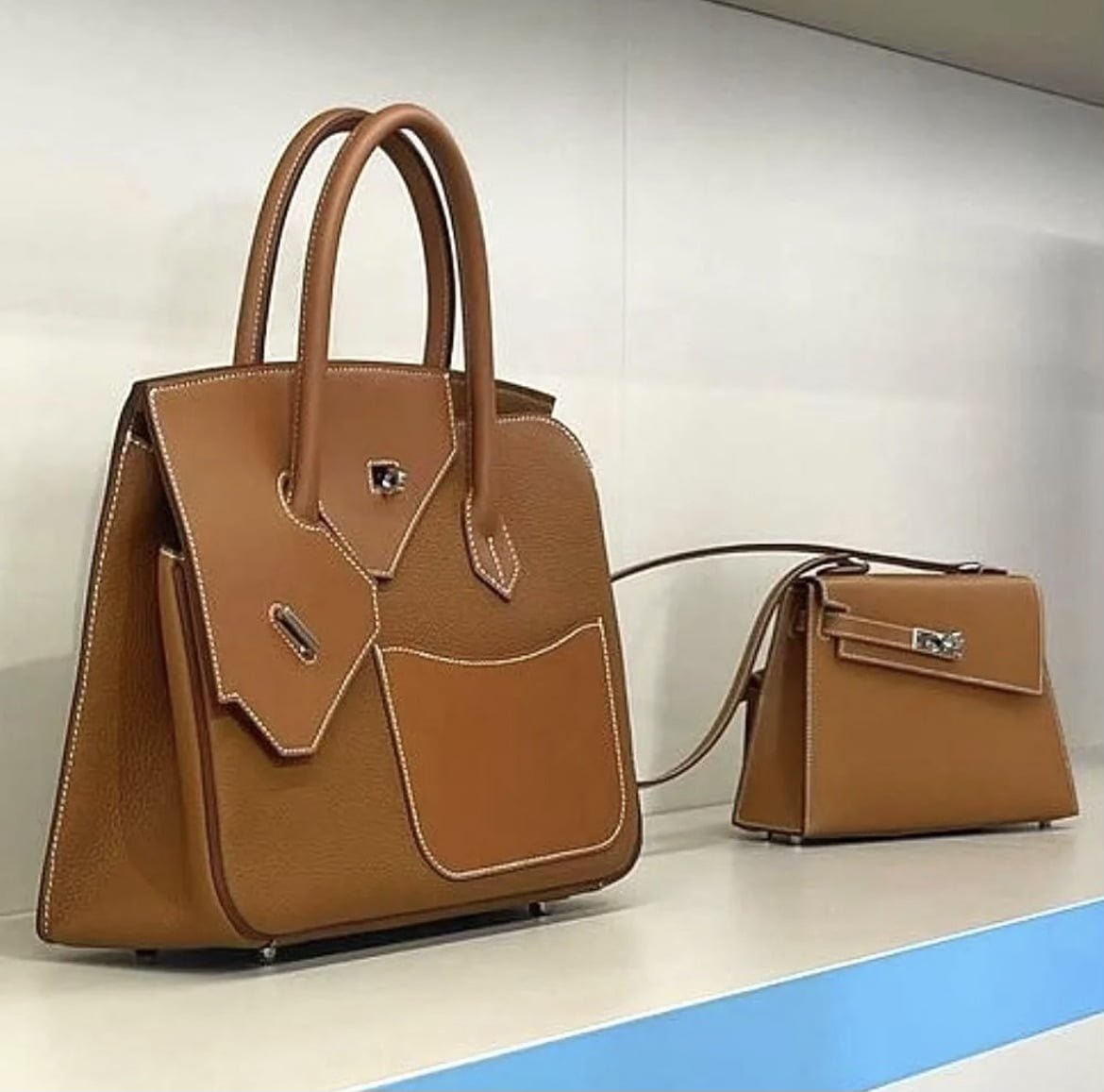 Let us know which bag is your favorite. Are you adding any of them to your wishlist?

The Hermès Roulis: Everything You Need To Know